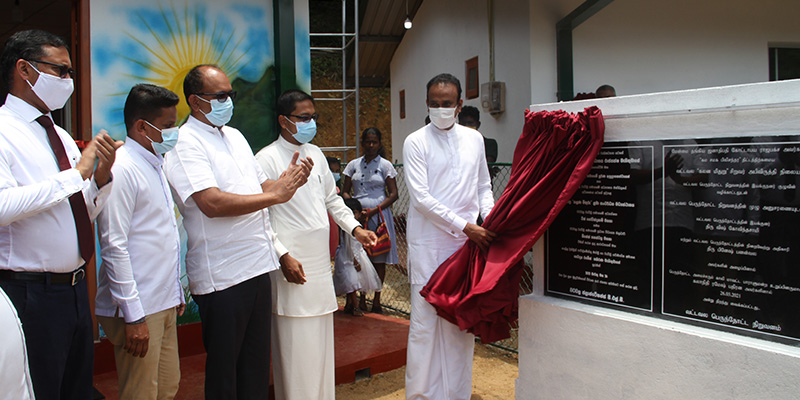 Donates a dispensary and Montessori under ‘Watawala Kalana Mithru’ initiative for people in Kotelawala Village, Udugama

Speaking at the ceremony, Minister of Plantation Dr. Ramesh Pathirana said, “Watawala Plantations is one of the foremost companies in the country that actively engage in uplfiting the livelihood of different stakeholders of the plantation community. Over the years, Watawala Plantations has always supported the government and its various development initiatives in this region and across Sri Lanka. The company annualy allocates a huge amount of money to develop the plantaation company which why Watawala Plantations is recognised as one of the most valued plantation companies among the 23 RPCs in Sri Lanka. For the measures taken to improve the lives of these innocent people fro Kotelawala village, I thank the company from the bottom of my heart. I wish them nothing but the best to continue such great intitaives for a long time.”

Watawala Plantations Chief Executive Officer Binesh Pananwala said, “As a responsible agribusiness company in the country, we always strive hard to uplift lives of our direct and indirect stakeholders of the plantation community through several social welfare initiatives. The request to build a new dispensary and a Montessori came at a district development committee meeting which was chaired by His Excellency the President Gotabaya Rajapaksha. We took up his request passionately, and today, we are privileged to hand these donations to our beloved people in Kotelawala Village.”

Watawala Plantations, under their social welfare programme, aims to develop and transform Kotelawala village into a model village in the Galle District under five key elements—education, healthcare, sports, life skills and guidance and livelihood. The company is vying to implement a medium-term program where the Kotelawala village children will be given the opportunity to practice and compete in sports such as volleyball and table tennis and be a part of a strong sports program hosted by WATA. It also entails a life and career guidance programme that aims to nurture and fortify the aspirations of the community. As a long term goal, the company looks to launch an organic farming initiative to uplift people’s lives in the area economically

Watawala “Kalana Mithuru” enriches the community throuagh a Dispensary and a Montessori
June 1, 2021

An Endorsement from the Priest of the Village
June 1, 2021
Go to Top